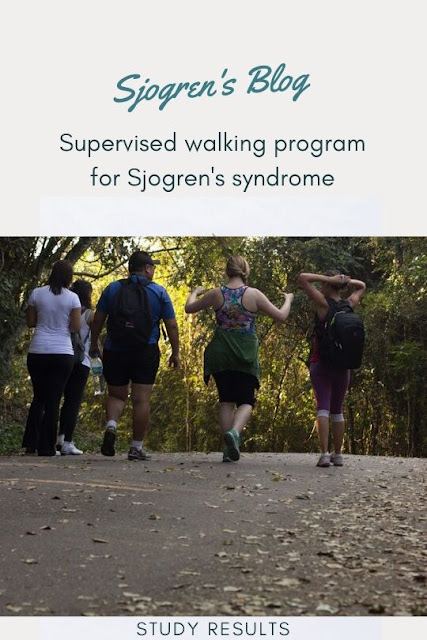 The aim of this study was to evaluate the safety and effectiveness of a supervised walking program in women with primary Sjögren’s syndrome (pSS).

Forty-five sedentary women fulfilling the American European Consensus Criteria for pSS were randomly placed into one of two training groups: 23 were placed in TG (Target Group)and 22 in CG (Control Group)
The following were assessed:
Patients in the TG joined in supervised walking three times a week for 16 weeks.
The patients of the CG were instructed not to do any kind of regular physical exercise for the 16 weeks.

After 16 weeks, the average changes were higher in the TG than in the CG.

Improved cardiorespiratory fitness was associated with improvements in fatigue scores and physical components of quality of life. Cardiorespiratory fitness refers to the ability of the circulatory and respiratory systems to supply oxygen to skeletal muscles during sustained physical activity. Improved fatigue scores were associated with reduced depression and improvements in the physical and mental components of SF-36.

Overall, 95.4% of patients in the TG rated themselves as clinically improved versus 62% of the patients in the CG. There was no flare in disease activity and no serious adverse events with exercise.

This supervised walking program was demonstrated to be feasible and safe with improvements in cardiorespiratory fitness, exercise tolerance, fatigue, and patient perception of improvement in pSS patients. 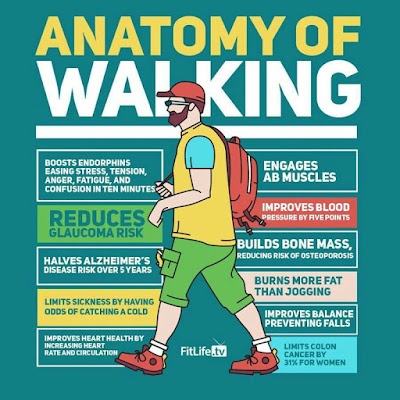 If you want to do this walking program yourself this is how it was done:

Each training session was preceded by a warm-up period, where patients were instructed to walk freely and slowly for 5 minutes, followed by 20 to 50 minutes of effective walking when they were instructed to maintain their paces to achieve the target heart rate and ending by a cold-up period for 5 minutes (similar to warm-up period).
The exercise prescription was based on the heart rate at the anaerobic threshold determined at the initial assessment. The increment of intensity exercise was based on time: 30 in the first 2 weeks, adding 5 minutes per week until eighth week, completing 60 minutes, which remains until the end.
Source:
Supervised walking improves cardiorespiratory fitness, exercise tolerance, and fatigue in women with primary Sjögren's syndrome: a randomized-controlled trial.

Email ThisBlogThis!Share to TwitterShare to FacebookShare to Pinterest
Labels: Research 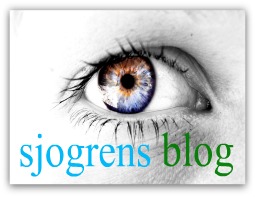